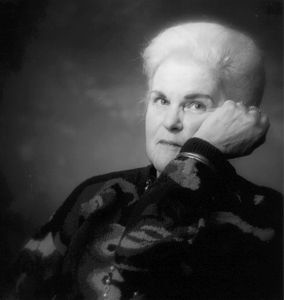 Anne McCaffrey, author of the Pern books among many others, passed away Monday night.  She was 85.

When I met her at DragonCon, she was confined to a wheelchair, but still feisty as all get out.  When I started to cry, she scolded me:  “Don’t you cry!  Damn it!”  Instead I laughed, and then thanked her for saving my life as a miserable, outcast teen in Idaho.

Then we told a bunch of redneck jokes and felt better about things.

It means so very much to me that I got to thank her.  I’m not overstating the case, her books honestly did save my life.  In jr. high, I had developed early, which led to me being labeled a slut, even though I was still a virgin.  I had bad skin, terrible skin, that necessitated Accutane treatments.  While we were better off than we had been when I was a young child and my mom had to make a lot of our clothes, I still didn’t own any of the trendy labels or brands of the day.  First quarter of jr. high: Honor Roll, say no more.I spent a lot of time hiding in the library.  And that is where I discovered the Dragonsinger books.  I think I found them while shelving books during my library aide period.   The covers were bright and interesting, a red haired girl with little dragons (fire lizards) perched on her.  Those lead to the The Dragonriders of Pern books, and then 15 years later to me sobbing uncontrollably while reading The Masterharper of Pern.  Ms. McCaffrey’s characters, Menolly and Lessa, gave me hope and strength to carry on in the face of bullying that had reached pretty horrendous proportions.

From the Dragonrider books, I branched out to her SF, like The Ship Who Sang, and the Talents stories, which later led to the Tower and Hive series beginning with The Rowan.
Anne McCaffrey was a wonderful author, a very kind person, and a great influence on many, many people.  She greatly influenced the depictions of women in SF/F.  More than one person replied to my reblogging of her death announcement with, “She saved me, too.”

There is so much more I’d like to say, but so much of it feels so very personal, even for me, the Queen of TMI.  I loved her long before I met her.  She gave me hope.  She built wonderful worlds to which I escaped when real life was too ugly.

Rest in peace, Ms. McCaffrey, you meant so very much, to so very many.  You were, and remain, my hero and an inspiration.  Thank you.

This entry was posted on November 23, 2011 by geekgirlsrule in Featured Articles.