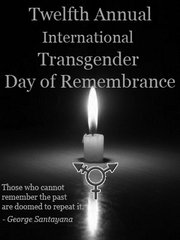 When I talk about discourse that needs killing, this is what I mean.

People die because of hate that is rationalized by “the Bible says it’s wrong,” “my religion doesn’t allow,” or “it’s unnatural.”

No, wait.  They don’t “die.”  They are murdered.  They are beaten, shot, stabbed and strangled.  Saying they “die” sounds like it was some mysterious force or a health issue.  They didn’t just die, they were murdered by people who justify their hate and violence with those very words in quotes above, or words very similar to them.

By treating those words as if they are worthy of debate, we lessen the worth of transgendered people everywhere.  By acting as if there is any actual moral reason to hate people for being “other” we endanger their lives.

I don’t give a good god damn what your holy books, or your holy men have to say about it.

Transgendered people are people.  And as such they deserve the same rights, liberties and protections that everyone else gets.  Period.  Full Stop.

If you don’t agree with me, we have nothing to talk about.

Now, please, join me in a moment of silence for those who died at the hands of others for being who they were.

One comment on “Twelfth Annual Transgender Day of Remembrance”

This entry was posted on November 21, 2010 by geekgirlsrule in Abuse, Featured Articles, LGBTQI Issues, Sexism, Surviving.